How to deal with toddler tantrums

There is so much to look forward to as babies grow into toddlers, but the start of tantrums is one development often dreaded by parents. Here we look at how to deal with tantrums. 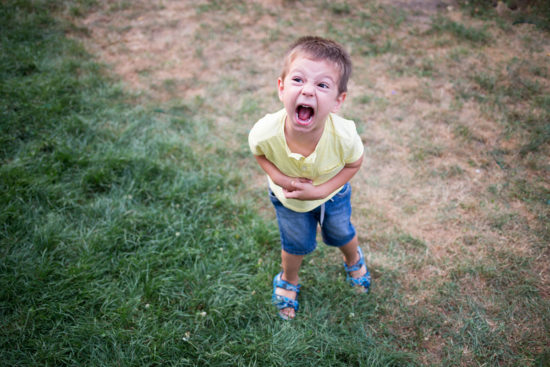 When it comes to tantrums, you are not alone and your child is definitely not the only one to ever have them. Tantrums are very common and part and parcel of your child’s development.

Tantrums show us that children are starting to know their own minds and are developing a desire to take some control over their lives.

As the authors of ‘The Social Toddler’ put it, they are “a positive sign that a child is making steps towards becoming an individual independent human being.

Tantrums also show us that children are starting to know their own minds and are developing a desire to take some control over their lives.”

Admittedly, when you’re in the midst of a meltdown, it might be hard to view tantrums as a positive sign of your toddler’s personal growth and development!

When do tantrums start?

Tantrums are generally understood to be expressions of frustration in children, particularly because of their lack of language skills and/or their inability to control their emotions. 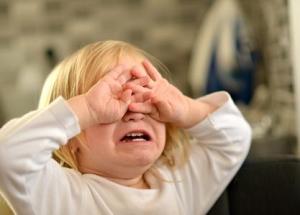 Typical triggers include hunger, tiredness, illness, boredom, being over-stimulated, not getting what they want, feeling ignored and transitions (such as leaving the playground). As children get older, they can also try to use tantrums to get what they want.

Tantrums can often be sparked off by things which seem very minor or random to an adult. How could you have known that giving your toddler the red spoon and not the green one at lunchtime would end in Armageddon?

What happens when a child has a tantrum?

There is some research about what happens during a tantrum. One classic American study analysed parental accounts of tantrums. It concluded that tantrums have two stages, anger followed by sadness.

Signs of anger such as screaming, kicking and stamping have their peak at the beginning of the tantrum and then decline. Crying and comfort-seeking slowly increase across the tantrum.

A more recent study, which used microphones in toddlers’ onesie to record the noises made during tantrums, suggests a different picture.

As with the earlier study, the research found that both anger and sadness were expressed during tantrums. However it discovered that sad sounds happened throughout. Anger noises occurred in sharp peaks. Once the child had got past the peaks of anger, only sadness remained.

While studies have been done on the nature of tantrums, unfortunately there is very little evidence on what strategies are effective for dealing with them. Having said that, the advice in current parenting literature on dealing with tantrums is mostly consistent.

Much of the guidance focuses on prevention. Understanding and avoiding a child’s tantrums is a key (and common sense) piece of advice.

Triggers will vary from child to child and may not be immediately obvious. It can take a while to work out the circumstances (e.g. being too hot) which make a meltdown more likely. It’s about trying to figure out if there is a pattern to the tantrums (and there may not be).

For instance, if a visit to the supermarket after nursery often prompts a meltdown, obvious strategies to consider are going at the weekend instead or buying what you need online.

If getting everyone out of the house in the morning can lead to tantrums, getting up a bit earlier and preparing as much as possible the night before can help.

Some tantrum triggers are unavoidable, like leaving the park. In these instances, prevention is more about minimising the child’s distress, for instance giving them a warning that it is time to leave.

Choosing your battles is another tactic to consider. ‘Is it really a problem if my child does this’ can be a good question to ask yourself. 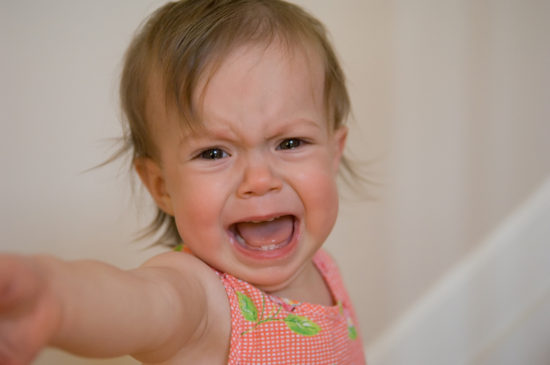 For instance, your child may have eccentric but passionately held views on what clothes they want to wear – does it matter if they wear odd socks or a completely mis-matched outfit?

Mealtimes can be another battleground. What age appropriate behaviour are you willing to let go (e.g. eating with their hands) and what do you feel is unacceptable for a two year old to do (e.g. throwing food on the floor)?

As a related point, using positive language to make requests (‘let’s do X’ rather than ‘don’t do Y’) can encourage co-operation.

Step in their shoes

Sometimes it can help to put yourself in your child’s shoes. A request that seems outlandish will no doubt make perfect sense from your child’s perspective.

Trying to understand what they are trying to achieve can help you come up with a solution that is acceptable to you both.

Using distractions is often suggested and this can work well because of toddlers’ notoriously short attention spans.

Distractions can work because of toddlers’ short attention spans.

If you can feel a tantrum brewing over something, pointing out a nearby cat/squirrel/fire engine/cement mixer may put a lid on it.

Being prepared with a toy or book to whip out of your bag at moments of angst is another approach which can work well for some children.

Give them a choice

Offering your children acceptable choices to see off tantrums is another common piece of parenting advice.

As with all the other strategies discussed here, the effectiveness of this depends upon your individual child. For some children it can work brilliantly but for others offering alternatives makes little difference because they have already made their mind up.

Encouraging co-operation through making things fun is another common recommendation. It can be possible to avoid battles over typical flashpoints (like hair washing) if you turn it into a game.

As with the other tactics discussed here, this doesn’t always work but it’s worth a try.

When should parents be worried about tantrums?

As tantrums are a normal part of a child’s development, the threshold for them being a problem is a high one. One American study among three to five year olds concluded that unpredictable, prolonged, and/or destructive tantrums are causes for concern.

The NHS advises that if you’re seriously concerned about your child’s behaviour, you should talk to your health visitor or GP.

Prevention can help, but the consensus is that tantrums are impossible to avoid. So what is a parent to do when faced with a meltdown?

Unfortunately, the advice is not always consistent when it comes to whether or not a child having a tantrum should be put in a separate room.

Staying with your child can be a good idea – leaving the room might make their feelings escalate and your (composed) presence might help them feel calmer. 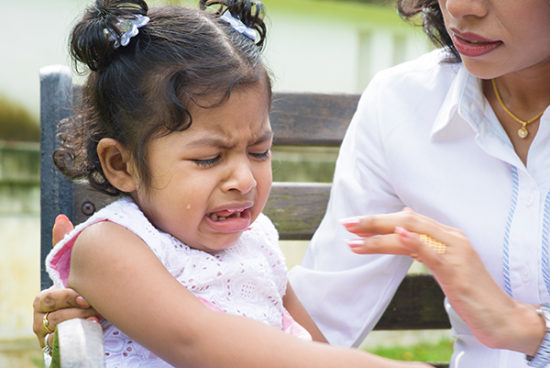 However, if you find yourself getting increasingly frustrated, it might help to leave the room for a few minutes (if it’s safe to leave your child), take a deep breath and come back. By staying calm, you will also help your child to feel less agitated too.

This can be more tricky if you’re out in public. Again, try and stay calm and move away from a crowded area if you’re feeling stressed. A child having a tantrum is not unusual and most people will be sympathising with you rather than judging!

Some experts advise holding a child during a tantrum (if they’re not flailing or resisting too much) but this also depends on the particular child.

Different things will work for different children and the context in which the tantrum is happening is also relevant. You might need to use different techniques or a combination depending on the situation.

Children can often feel overwhelmed by the strong emotions experienced during a tantrum and need calming and comforting.

Research suggests that helping children identify their different emotions can make them better equipped to deal with strong feelings.

Give them lots of cuddles and reassurance afterwards, or during if they’ll let you. It can help to talk about the child’s feelings to them and why they felt frustrated.

The research evidence suggests that helping children identify their different emotions is beneficial (it can make them better equipped to deal with strong emotions for instance).

There is generally little point in trying to reason with a child who is having a tantrum, particularly in the early phases of the tantrum when anger is the dominant emotion.

The researchers who conducted the onesie study discussed earlier suggest that the best way to get a tantrum to end as soon as possible is to get the child past the peaks of anger. And the quickest way to do this, in their view, is to do nothing.

They argue that once the child is past being angry, only sadness is left, and sad children reach out for comfort.

Label behaviour not the child

Although a child may appear to be behaving badly during a tantrum, younger children are merely having an emotional rather than intentional response to their situation.

Label their behaviour as naughty rather than your child.

It is therefore important not to label the behaviour as naughty or unacceptable, but acknowledge the sadness and frustration the child is experiencing.

As children get older, they can start to use tantrums as a way to get what they want. The best way to avoid this is to not give into tantrums, however difficult this may be.

Finding your own way

What works for you and your child will be different to another parent. Think about what can help you cope with a tantrum. This could be anything from taking deep breaths to getting your partner to pick up your tired toddler from nursery some afternoons instead of you.

As with parenting more generally, coping with tantrums is about finding what works for you and your family.

We’ve got lots more articles on our website about toddler tantrums and tricky behaviour.

NHS Choices has information about coping with tantrums.

This Australian parenting website has detailed suggestions on dealing with tantrums, including strategies for parents for keeping calm.