Knowing what you can and can’t eat or drink during pregnancy can be a minefield. We look at what foods to avoid and eating healthily. 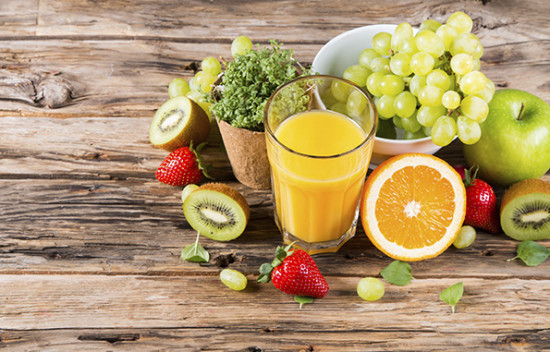 Can I eat scrambled eggs or Parma ham? Is liver bad for me? Will a glass of wine harm my unborn baby? If you’re pregnant, these are questions you may be asking. And if you’ve been online, you’ll know there’s a wealth of information out there. But how do you know which to trust?

Rosie Dodds, one of NCT’s Senior Policy Advisers, says: “If you’re searching for information online, check the date to see whether the information is the most recent available and, if it refers to a study, make sure it’s an overview of different pieces of research rather than just one, which might not give the full picture. If your information comes from friends and family remember that guidelines do change over time”.

If you’re ever unsure about anything, talk to your midwife who should be able to give you accurate recommendations about food and drink.

It can help if you understand why the guidelines are there in the first place.

“Changes to your immune system when pregnant make you more vulnerable to bacteria and parasites, such as listeria, toxoplasmosis and salmonella, which can cause you to be unwell and lead to miscarriage, stillbirth or illness in a newborn baby,” explains Rosie.

Importantly, keep in mind that very few babies are affected by food-related factors in pregnancy. If you’re ever unsure about anything, talk to your midwife who should be able to give you accurate recommendations about food and drink.

You can also find lots of helpful information on our website, as well as a list of food and drink to avoid at the end of this article. 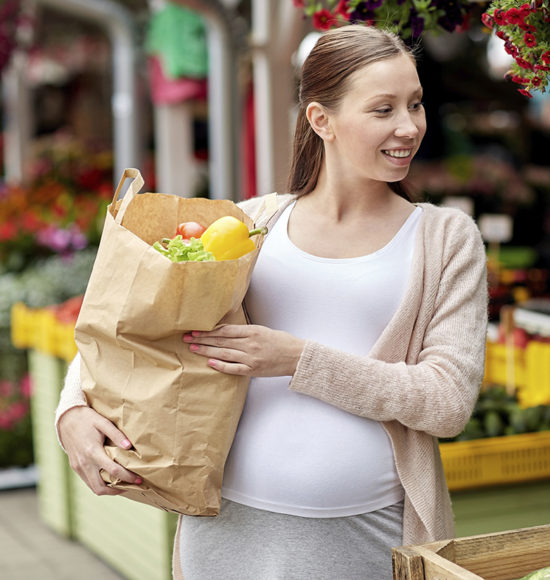 Eating healthily during your pregnancy from a range of food groups can be beneficial for you and your baby.

If you’re unsure about what makes up a balanced diet, NHS Choices has a useful Eatwell Guide on different food groups and how to get a healthy mix of foods.

There’s no need to eat any more than you usually would either; just eat healthily according to your appetite.

Current guidelines allow an extra 200 calories in the final three months of your pregnancy, but this will depend on how active you are and most women will simply adjust their intake unconsciously.

Sometimes it can be hard to stick to a healthy diet, especially if you experience nausea or food cravings. 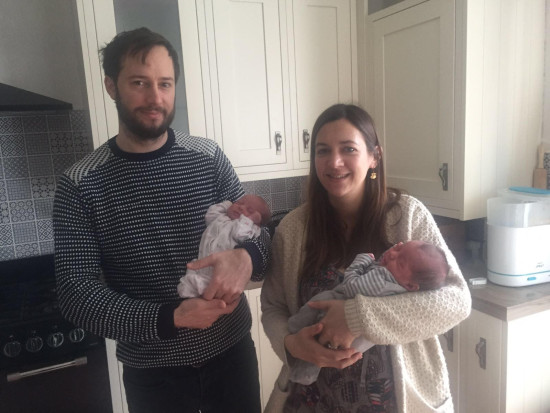 Rachel O’Neill from NCT Wandsworth & District branch and mum to six-week-old Beatrice says she craved sugar throughout her pregnancy.

While NCT member Sally Hallworth (pictured) says that when she was expecting her twins she was keen to take in enough ‘good’ calories to give them the best chance possible but, while she snacked on cottage cheese, hummus, peanut butter and avocado, she did sometimes give in to her cravings for less healthy foods and “feel guilty afterwards”.

Far from feeling bad about yourself, NCT’s Rosie says: “If you do have cravings for unhealthy foods you can try to balance them out with healthier things the rest of the time.”

She also adds that if you are suffering from nausea it’s better for you and your baby to eat anything you can keep down rather than nothing at all.

Experts are still unsure exactly how much, if any, alcohol is safe for you to have while you’re pregnant. All recommendations therefore agree that the safest approach is not to drink at all while you’re expecting. Alcohol can reach the bloodstream of an unborn baby and affect growth and development at all stages.

If you feel unable to cut out alcohol, or that your drinking is out of control, it’s important to get help and support – try talking to your midwife or doctor, who should be understanding, not judgemental.

Your weight gain in pregnancy will depend on your weight before but most women put on between 22 and 26 pounds during their pregnancy, putting on most weight after week 20.

Your midwife will work out your body mass index at your first antenatal appointment.

In most cases, your midwife will work out your body mass index (BMI) at your first antenatal appointment and if it’s high or low you may be offered a weight management programme for your pregnancy. In some areas you will also be referred for consultant-led rather than midwife-led care and advised to give birth in hospital rather than a midwife-led unit.

NCT Antenatal Teacher Lucy Markes says this can be a cause of anxiety for some women. “It’s a horrible feeling being labelled high risk because of your BMI, especially if it affects where and how you have your baby”. You can talk to your midwife if you’re concerned to find out what your options are.

Find out more about weight gain in pregnancy.

Eating healthily in pregnancy if you’re on a low income

Healthy Start is a government scheme which provides vouchers to pregnant women on a low income and all pregnant women under 18 to buy some basic healthy foods, such as milk, fruit and vegetables. You can also receive free vitamins.

Read more about the scheme in our article about financial support for parents on a low income.

If this is your first pregnancy, family and friends may well be suggesting that you and your partner enjoy some meals out before the baby comes, but eating out can be tricky for pregnant women.

Sarah says: “Eating out was a nightmare as often things like undercooked egg are in dishes you don’t necessarily think of like cheesecake and fresh mayonnaise or sauces”.

Before going out, it can be helpful to check menus online and see if there are a range of options for you to choose from. If you are in any doubt about the ingredients in a particular dish, check with staff where you’re eating.

Food and drink to avoid in pregnancy

Soft cheeses with white rinds, such as brie, camembert and soft goats’ cheese, should be avoided along with blue veined cheeses such as Danish blue, Gorgonzola, Stilton and Roquefort. The manufacturing process of these types of cheese encourages moulds to grow and so provide an ideal environment for harmful bacteria, such as listeria.

There is some recent evidence that eggs with runny yolks are safe to eat if produced to British Lion Quality standards but NHS Choices still says they should be thoroughly cooked until the whites and yolks are solid to prevent the small risk of salmonella food poisoning.

Raw or undercooked meat is not recommended in pregnancy because of the potential risk of toxoplasmosis. Meat should be cooked all the way through until there are no traces of blood or any pink. Cured cold meats, such as Parma ham, chorizo, salami and pepperoni, which have not been cooked, could also contain toxoplasmosis-causing parasites, so are best avoided or, you can freeze them for four days before eating, as freezing will kill most parasites.

Liver and foods with liver in them, such as liver pâté, liver sausage or haggis, are not recommended as they may contain a lot of vitamin A, which has been associated with birth defects though very rarely. The same applies to supplements or fish oils containing high levels of vitamin A.

Fish is generally a healthy food that is good for you and your baby. However, shark, swordfish or marlin can contain high levels of mercury which could affect a baby’s nervous system. Tuna can also contain mercury so the recommendation is to limit the amount you eat to two steaks a week or four medium sized cans.

You should also avoid having more than two portions of oily fish a week, such as salmon, trout, mackerel and herring, because they can contain pollutants such as dioxins and polychlorinated biphenyls (PCBs). Note that fresh tuna is counted as an oily fish but tinned tuna isn’t.

You can have any amount of white fish. Cooked shellfish and smoked fish are also considered OK to eat in pregnancy.

Sushi is fine when you’re pregnant, as long as any raw wild fish used to make it has been frozen first. This is because, occasionally, wild fish contains small parasitic worms that could make you ill. Freezing kills the worms and makes raw fish safe to eat. Cooking will also kill them. If you’re in any doubt about the origins of your sushi, you might want to avoid eating the kinds that contain raw fish, such as tuna.

There is no need to avoid nuts in pregnancy, unless you have an allergy and are, of course, avoiding them anyway.

Caffeine is naturally found in lots of foods, such as coffee, tea (including green tea) and chocolate, and is added to some soft drinks and energy drinks. Some cold and flu remedies also contain caffeine.

Too much caffeine can increase the chance of a miscarriage slightly, with recent research suggesting that when trying for a baby, both women and men should limit their caffeine intake. Read more about caffeine content of foods and drinks.