Last week, we welcomed the news that the government has tabled legislation to make it illegal to photograph or film breastfeeding without consent, as campaigned for by organisations including ourselves, Stella Creasey MP and Julia Cooper. Find out more. 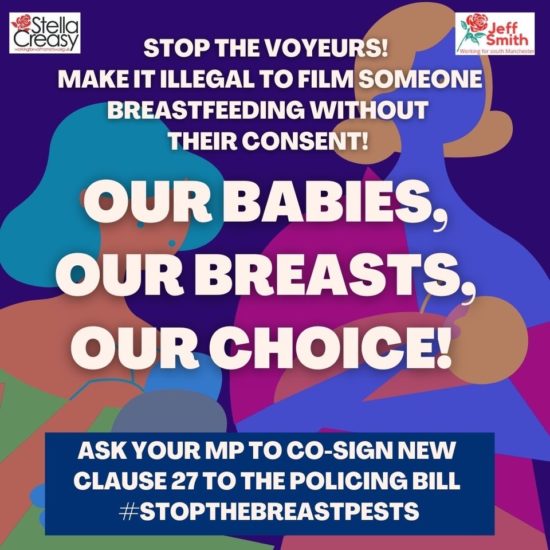 A change in the law

In April 2020, designer and new mum Julia Cooper was breastfeeding her baby daughter for only the second time ever in public, when she noticed a man had attached a zoom lens to his camera and was taking pictures of her.

She told us: “I confronted him, but he refused to delete the photos. I then spoke to the police, and [found] it is currently legal to take and keep photographs of breastfeeding, even without consent.”

When Julia approached Greater Manchester Police, they confirmed that there was nothing they could do as it wasn’t against the law.

She decided to set up a campaign with Jeff Smith, MP for Manchester Withington and Stella Creasey, MP for Walthamstow – who had had a similar distressing experience on a train while feeding her daughter – to make taking photos of breastfeeding in public without consent illegal.

Last week, we heard the fantastic news that the campaign had been successful and the government tabled legislation to make it illegal to photograph or film breastfeeding without consent.

Stella Creasey thanked us and other organisations who’d supported the campaign on social media.

Parents who choose to breastfeed should feel free to do so

At NCT we believe that parents who choose to breastfeed should feel free to do so whenever their baby is hungry. This new law helps to remove another obstacle that sadly, in the past, has left mothers feeling harassed and restricted when needing to feed.

This is an important win for all those organisations who supported this campaign and for the mums and parents who raised their voice to help make change happen.

If you have any questions about feeding your baby, call our breastfeeding counsellors on 0300 330 0700. Lines are open every day of the year, 8am to midnight.

We also have lots of articles about feeding your baby.