My NCT story: A lifelong friendship 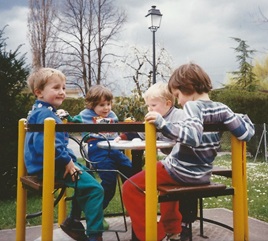 Ruth and Anne's children in 1993, from left: Guy, Joshua, Alasdair and Daniel

In 1988, Ruth, her husband, David, and baby son, Daniel, moved to Strawberry Hill, Twickenham, at the same time as I relocated with my husband, Mark, and six-month old son, Guy, to nearby Teddington.

After attending NCT coffee mornings and teas, Ruth and I both decided to become more involved with our local branch and attended a session on the same day. This was the first time we met. We started talking and I offered her and Daniel a lift home afterwards.

We started to met up frequently, for the boys to play together, to attend toddlers’ music sessions and days out with our respective husbands, once on a steam train (the boys were both keen Thomas The Tank Engine fans).

To our great surprise and delight we became pregnant again at the same time and attended the same NCT antenatal class. Ruth gave birth to Joshua just three weeks after I had Alasdair.

Soon after this David’s job was made redundant and a new post took him and the family to Geneva. It was important to both of us to keep in touch and Ruth and I exchanged news by phone, letter and later, email. 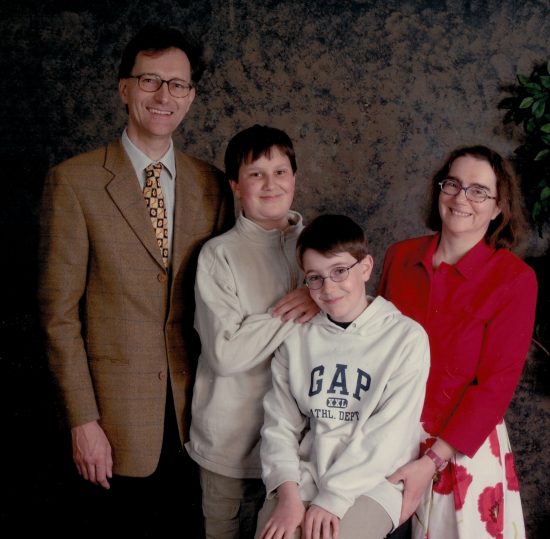 Ruth and her family

We stayed with each other many times, for holidays, to break up longer journeys and once for an unexpected stay due to a delayed flight! Ruth embraced life in Switzerland, becoming fluent in French and working first for the UN and then the canton, or state, of Geneva. She took huge interest in the local area and the whole family took part in a big parade for the millennium. She researched her Jewish roots and worked on her family tree.

In 2011 David’s job again took him away, transferring this time to Montreal. Ruth resigned her job and once more packed up the house and said goodbye to many friends. Daniel and Joshua, by now in their early twenties, chose to stay in Europe rather than moving to Canada, but visited frequently.

Again, Ruth threw herself into life in a foreign country, only this time further away.  She volunteered for a museum devoted to the history of Montreal, coordinated research projects into Jewish history and took on learning Hebrew (no mean feat I understand). Mark and I visited in 2014 and Ruth enthusiastically showed us around her new adopted city.

The arrival of Joshua’s two children brought Ruth great joy and she became a devoted and besotted grandmother.

It was during a visit from Joshua and his family that Ruth died unexpectedly, but peacefully, in her sleep at the age of 61.

Ruth was keen for NCT to be left money in the event of her death and I am pleased to be able to do this on her behalf. NCT introduced us and gave us a cause we both felt passionate about – the need for women to be able to make informed choices when giving birth.

We are so grateful for the donation that Ruth left us. It was a generous gift from a wonderful woman.